The Romulans have brought back an old favorite: The Raptor Class.

A few posts ago Optec had mentioned the Raptor class was coming back to the Romulan Fleet. Today I wanted to share the design process behind bring this Raptor back to life.  The redesign of the Raptor was a pretty unique experience. Like the Griffin and the Shrike, the Raptor is a Romulan ship from Armada 1 and 2. But the models from Armada 1 and 2 are clearly outdated for use in Fleet Ops. Rather than just straight copying the old Raptor models I had the chance to modernize the design while still trying to pay homage to the older ones.

My design process started with the concept art for the Raptor redesign. One of the most important things that I wanted the new Raptor class to have was the original silhouette. The top silhouette is probably the best way people identify a ship, particularly since Fleet Ops is an RTS. Keeping the Raptor silhouette will help bring back those old memories of playing Armada 1 and 2.  This stage also allowed me to give the raptor a new underside.  The underside of the raptor was almost completely ignored in the original models.  I wanted the underside of the raptor to be a bit more sparse and feel like the skeleton holding up the wings.  This would make the Raptor feel more like an artillery cannon since most of the weight would be where the launcher is, in the main body. 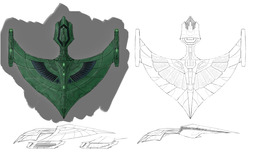 Since the silhouette of the Raptor was pretty much set, the next step was the details. I wanted the basic plates of the Raptor to be the same as the original Raptor. However the textures from Armada 1 and 2 are pretty low resolution; this limits their detail. This let me bring in another source for the raptor: the original concept art. The concept art is certainly an interesting view into what the original artist envisioned for the Raptor. This was particularly true for the head of the Raptor, which was smoothed out for the low polygon model. I wanted to have something that brought out that unique head design and look more like the concept art than the original.

Of course the Raptor's most unique and obvious feature are the large exhaust grills on her wings. These were crucial to making the redesign feel like the Raptor. The grills on the FO Raptor needed to be almost the exact same. However for the rest of the wings there were still plenty of room for new and unique detail. For the details on the wings I looked to other Romulan ships. Specifically the Griffin and the Shrike, two other ships that have already been transfered to Fleet Ops. Having all three ships being in the original Armada 1 and 2, I felt these ships should share a lineage and design aspects. Using these ships as style guides I was able to add new armor plating and cool devices along the Raptor's hull without breaking the silhouette.

Finally, here is the new Raptor for Fleet Ops.

Look forward to hearing about the Raptor's role in the Romulan Fleet in a future news post.