The Avalon: A Fighter Carrier
Saturday, 25 August 2012 Written by  Dominus_Noctis

Behold the fearsome power of fighter wings descending upon your fleet!

Yet another vessel to survive the transition to our next version is the Avalon. This fearsome fighter-carrier is a slow beast, available only to Risner. Emphasis has been shifted even more strongly to its Fighters, such that the Avalon’s main armament is intended to be exhibited via these small craft. While the Avalon’s defensive capabilities are nonetheless impressive, there should be no doubt: its true strength comes from its Fighters.

These small vessels are equipped with powerful ECM suites and all regular weapons have only a 50% chance to strike Fighters. While Fighters still give experience upon destruction, Fighters can act as a screen for your fleet, just as they did in DS9 during some of the most climactic battles. If enemy units are left unnatended or are trying to retreat, a player will find that those ships are trying to target Fighters rather than warships. Nonetheless this Fighter screen can also be countered by many regular area of effect types of weapons. For instance Critical hits from Offensive profile units decimate automatically spawning Fighters and so do Platforms. If you find yourself massing non area of effect weapons, prepare to get punished by those Fighter squadrons however!

The Avalon is also now available from your Antares Yard, making it a relatively early unit. However, the slow moving fighter-carrier is best used in large fleet engagements and not for harassment, where it can be easily left behind and killed. When an Avalon or Fighter-carrying vessel is destroyed, its Fighters will transfer to the nearest hangar-equipped vessel. An Avalon can only spawn four Quantum Pulse armed Valkyrie Fighters on its own, but it may support any number of additional Fighters that transfer to it.

As we just stated, the Avalon - while being available early on - is not the best harassment vessel. However, the Avalon does excel in supporting your units, even when it is not near them! Let’s check out its very unique technology: Fighter Transfer.

If you recall from watching Deep Space 9 and The Next Generation, Peregrine Fighters made several appearances as small, but capable warships. Since these times, Peregrine Fighters have undergone numerous refits, allowing them to be even be serviced by larger regular shuttle bays - such as those seen on more important Federation vessels.

Unlike most other special technologies, Fighter Transfer does not require any research to be used. While Fighter Transfer costs a small amount of resources to be used, it allows you to add a single Peregrine Fighter to an Allround or hangar-equipped starship of your choice - like the ferocious Akira we mentioned in last week’s newspost or the Sovereign - which we will discuss soon. This can allow you to slowly boost the numbers of Fighters Avalons may carry, as well as provide fast attack groups with a Fighter screen. Likewise, Fighter Transfer can be used to transform single vessels into veritable attack squadrons, which greatly improves harassment capabilities. 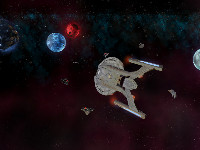 For instance, you can imagine your typical lowly Intrepid, armed with only Phasers and Torpedoes… suddenly home to a hive of Fighter craft, allowing that vessel to pick apart Freighters with its new Pulse-Phaser armed escorts! 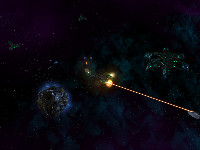 Next time we’ll discuss another mean vessel - the one true warship of the Federation! ‘Till next time!