The Lore and Design of the Calypso
Sunday, 05 August 2012 Written by  Zeich

Last week Optec introduced the federation's newest ship: the Calypso. As you read in his post the ship has a lot of history. This led to a long and interesting design process.

I felt like I needed to come up with an interesting design that both captured the feeling of a defensive ship but also reflected the original lore. The first challenge was coming up with the federation chassis that is both unique and fits in with the rest of the ships. This is pretty hard as you can imagine with so many federation ships already out there. The lore of the Calypso describes this small science ship that has been refitted with pulse weaponry. As you can see below this lead me to come up with designs similar to the Nova, Norway and Canaveral classes. 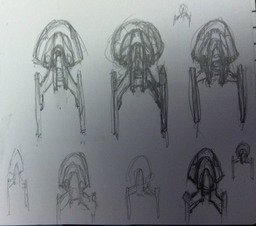 One of the interesting things about the Calypso lore was its large shuttle bay. The Calypso used this shuttle bay for loading and unloading various scientific equipment. This feature was included in all my original designs. I eventually took all the pieces I liked from the previous sketches and came up with a more solid design. 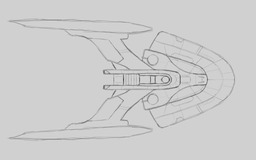 This design resembled the Norway in many ways. The body and the interior of the saucer was something I really liked and carried through to the final design. I originally gave the Calypso long thin nacells, similar to those on the Sovereign. I thought this would give the Calypso something to distinguish her from other small ships and bring her in line with another favorite of mine: the Centaur.

However as I looked at the design more and more I felt like it did not fit the Calypso lore. The ship felt more like a small attack ship, along the lines of the Defiant or Saber. So when I went to draw up the orthographic views I would use for modeling I made some changes. 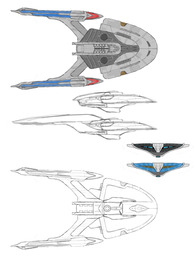 This resulted in a redesign where I rounded out the saucer a bit and extended interior of the saucer a bit. This allowed for an even larger shuttle bay but also made the ship more compact.

I wanted the underside of the ship to feel different from the rest of the design. The underside was originally where the Oberth-style science pod used to be. When the ship design was refitted, that was completely removed and a new engineering section was added in its place. This to the deflector design. I wanted the Calypso to have a deflector that reflects its old scientific nature but felt like it was added on. This resulted in a large Intrepid like deflector, but with additional devices surrounding it to make it feel a little more modern.

After this redesign I moved on to the modeling

As I was modeling this ship, I once again realized that the ship felt too aggressive. The rounded triangular Norway-style saucer was wrong for this ship. I feel that defense profile ship should resemble a tank. This resulted in me once again rounding out the saucer to make it more like a half-oval shape.

Even after I finished this revision, I felt the nacells no longer flowed with the rest of the design. So I decided it was time to redesign those as well. Going with the idea of a defensive vessel, I wanted the nacells to feel more bulky.

This lead to something I had wanted to bring into a design for a long time: integrating the pylons more with the nacell. Almost all federation ships have pylons which support a nacell on top of them. In the Calypso I wanted the pylon to cradle and hold the nacells under them like they are too massive to support with the thin pylon. After this redesign I was finally content with how the ship worked as a defensive ship and the lore behind it.

As I started the ship, I finally started to dive the most unique thing about the Calypso: the holographic domes. Holograms play a huge part in Star Trek. Hologram projectors have taken many forms in the Star Trek universe. The most iconic one of course the yellow grid on the black walls in The Next Generation. The lore of the Calypso described the holoprojectors as domes. So my first attempt was just that: hemispheres.

However this did not have the right feel to them. They broke up the flow of the ship and they also did not feel like advanced federation technology. Additionally, the yellow grid did not lend itself to a dome. So I started looking at the newer holodeck designs from Deep Space Nine and Voyager. These designs feature a lattice structure with interlocking rods. This fixed my problem where it did not look like advanced federation technology, but it was too detailed to be used on a small ship in game. So I decided to try to find some middle ground. This was the result.

This design combines the lattice rods with something a bit more bulky and simple. It also flows with the rest of the design more than the large dome. And of course it integrates the iconic yellow grid that we all associate with holographic projectors.

That is how the Calypso came to be. Now for the pretty pictures.

And last but not least, the Calypso gets upgraded holoprojectors when she becomes a veteran. All the projector rods are integrated into the main system, resulting in a more effective holoprojector.

Stay tuned for more information about new Federation features in the future!