Discover a new Federation specialist vessel in the next version: The Calypso Class, bringing holo-emitters to a new use.

Ok, with the new page up and running we can finally continue with actual in-game related newsposts as we promised. Please understand that creating the page and continuing the development of the next major Fleet Operations version had put us into quite a hurry.

Today, I want to fill a small open spot in one of my earlier news posts where I talked about the new dual-yard start for the Federation. One vessel in the Cassiopeia yard was unrevealed... until now! Let's talk about the all-new Calypso Class.

The Calypso, originally built as a pure science ship, is an advanced vessel, equipped with very sophisticated special equipment. It was only produced in smaller numbers and acted a bit like the old Oberth Class science vessel: to perform surveys of super novae, to explore strange nebulae or to go where no one has gone before. 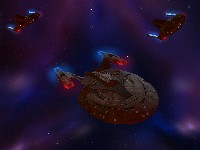 The USS Fenrir leads a task forceAfter the Dominion War, however, the Federation struggled to fill its ranks to secure its member planets against pirate raids or similar threats. The Canaveral Class, originally a civil vessel, was refitted in that process, and the Calypso suffered a similar fate. The ship originally carried a large configurable pod under its saucer - similar to the large main body of the Oberth Class - which could be adapted with special scientific devices. The pod was completely removed and the ship was refitted with modern pulse weaponry, high yield shields and phaser arrays. Yet, its most remarkable refit is based on the Calypso's powerful energy grid that was used to power the many scientific apparatuses: the Holographic Countermeasures.

A grid of low-energy holo-projectors was installed along the main hull and two large holographic domes, clearly visible on the saucer, allow the ship to project holographic fake images and signatures around itself, which are sustained by the hull-mounted grid. This has a similar effect to the popular ECM systems installed on all ships, which project fake sensor readings to lure projectiles into missing their target. Yet, HCM is a far more powerful, but experimental technology.

Gameplay-wise the Calypso serves as a Defensive-Profile unit for the Cassiopeia Yard, similar to how the Monsoon Class works for the Antares Yard. It is a very capable unit that provides cover for your more fragile support ships and provides early game pulse weaponry, which is rare among other Federation vessels. In addition, it especially shines if combined with long-range vessels, as its HCM special technology not only grants her a great projectile avoidance for a limited time, but also nearby long-range vessels can hide behind the fake holographic images. 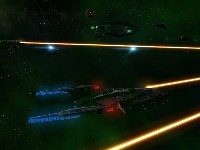 A Calypso Class in combatDesign-wise the Calypso was done by Zeich and he will follow with a newspost next week, describing the special requirements that the Calypso background story provided, the way we tried to catch its unique character and how a spaceship model comes to life and gets into the game.

We will also soon take a look into the new and complete Federation techtree and some new and exciting features in the next weeks.