Flagship of the Federation!
Tuesday, 01 April 2014 Written by  Dominus_Noctis

Come aboard the newest, grandest, and sturdiest Federation starship in the fleet!

Over the past few months, a lot of things have changed.

One of the most important adjustments has been to select which ship will represent the Federation's flagship on the field of battle.

Now, some of you might recall that we had initially settled on the Sovereign. However, as most people know, the Sovereign lacks saucer separation and would make Galaxy fans unhappy, and we cannot have that.

Likewise, the Sovereign and Galaxy are both creations of a time of peace, and that just doesn't fit with the Federation's goals of galactic domination through root beer.

So, we decided to pick a non-partisan ship. A ship which has never gotten enough screentime, yet, the chosen ship of the strongest human individuals ever to be birthed. And which would never be caught dead holding a root beer.

With that triumphant cry, we bring you the almighty Miranda! 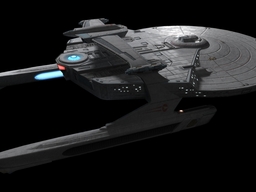 The most powerful ship in existence, having all but destroyed the most logical of creatures and the most shirtless of captains - only to be decimated due to underheaded treachery and redundancies. Were it not for that vile act, the Miranduh surely would have gone down as the most powerful weapon of war to have ever been created. Indeed, armed with a torpedo capable of unmaking entire planets, it is about time that ship - nay - this vessel of divine vengeance, were to once again make its appearance.

As one of our goals of the next version is to have completely interactive map objects, the only way to claim the Miranda as your flagship is first to find a derelict sleeper ship. For all you absent minded admirals out there - this is your ticket to the big screen! Should you find such a ship and somehow forget to check in every now and then on whatever ship were to find that sleeper... well, you might just find yourself in control of The Miranda. That's right - The Miranda will lead your forces into ultimate victory, pummeling your enemies with their superior ambition.

Just don't turn your back for too long, otherwise you'll be crying Khan in no time!

As an ultimate battleship must have an ultimate weapon, the Miranda carries in its standard complement, a one-time use Genesis torpedo. This weapons unmakes anything in its radius. As an added Federation synergy, if you carry a Galaxy in your fleet, the "Saucer Separation" ability will come online.

Just be... careful... where you launch the torpedo. If not, no amount of pointy eared treachery will save your fleet.