Plot a course for the starbase, ensign!

While we've talked plenty about ships, special technologies, and even Platforms, we've left one topic relatively untouched: the starbase!

In the past, the starbase was almost identical for each faction. Other than an armament change and slightly different values, each starbase had the same role, cost the same, and had identical upgrades.

So today we're going to talk a bit about the Federation and Romulan starbases.

The Federation is well known in Star Trek for building hundreds of varied outposts. They have small, easily-destroyed research facilities - like the Tanuga IV Research Station - , outposts used as centers of command and control - like Starbase-375 - and even huge, heavily-armed starbases, like the infamous DS9.

In Fleet Operations we’ve decided to go a similar route. Mirroring our new refit system for the Newton, when you first build an Outpost you will gain access to three, mutually exclusive refits. Each refit grants the Outpost new capabilities and a new appearance, putting it in line with what we’ve all seen in Star Trek. Similarly, the starting Outpost and all Outposts you initially build have greatly reduced offensive and defensive capabilities. Outposts, however, are rather cheap, allowing you to place several of them in a given game, which allows powerful map control.

The Exploration refit is geared more to scientific endeavors. Increasing System Value and line of sight if you build science facilities, the Exploration refit also grants you access to an advanced Federation scout: the Danube-class! This speedy vessel has twice the defense of a Venture, giving you greater resilience in the firing line. Alas, it has a limited production run due to its extremely advanced manufacturing techniques. The Danube has the ability to drop a limited number of Sensor Probes as well. These Probes grant line of sight, but their greatest usage comes against cloaking factions. Probes share Tachyon Ping upgrades with the Sensor Platform, thus allowing you to bring out mobile detection relatively early.

The Base of Operations refit doubles the structure’s Offensive Value, adds additional weapon types, grants you a repair facility, and allows you to produce Newtons more efficiently. This is a hub for frontier operations: it can allow you to put up a pseudo-yard and hang in there, though it doesn’t give you any particular offensive capability. Yards are expensive and frail things, and you generally want to have them near the front lines - a Base of Operations can give you similar capabilities, but with teeth.

The last refit is the Federation Protectorate refit. This refit doubles the Outpost’s Defensive Value and equips the structure with full scale industrial replicators. The Outpost is subsequently capable of automatically assembling and beaming out fully functional Phaser Platforms when it is under attack. The longer you attack the Outpost, the more Phaser Platforms are beamed out. Of course, only a limited number of Platforms can be maintained at a time and for a discrete amount of time, but Starfleet Science assures me that their capabilities are more than enough to drive off those who’d wish to attack the Outpost or civilian ships gathered under its pylons. 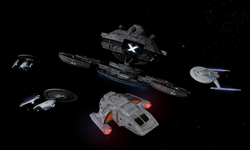 Now, many have clamored in the past for a Starbase-type Outpost. While it is such an iconic feature of the Star Trek universe, we believe that the Federation would not build such a huge and expensive structure in contested sectors. While you might see such a structure in themed maps, your expedition forces don’t have the resources to muster such an incredible endeavor.

We’ve spent the bulk of our time on the Federation, and that’s for a simple reason: the Romulans approach starbase operations completely differently and much more simply. For them, having a massive central Sector Command starbase is good enough. Investing in outpost-like research stations all over the place just isn’t part of the Romulan mindset. What good is a stationary massively expensive structure when you can just spread around some mobile cloaked starbase-like D’deridex? The Romulans expand slowly, and surreptitiously.

To this end, you can acquire automatic upgrades to your Mogai construction vessel - allowing it to move unseen in its cloaked state - and to your Sector Command - allowing it to bring its singularities to good use, powering your nearby fleet. Your Sector Command represents an expensive centralized structure, and its cost, defensive, and offensive capabilities reflect this fact.