The Rhienn: Can't Touch This
Sunday, 25 November 2012 Written by  Dominus_Noctis

Join me as we step into phase with the new Rhienn!

The basic unrefitted Rhienn is an old favorite - or nemesis. Its Version 4 descendent inherits some ancient features, but like most units in our new version it has undergone quite the evolution.

First up, the Rhienn’s no-frills role. Last week we introduced the basic concept of Doctrines. Like the Generix, the specialist Rhienn also carries a Doctrine passive. This aptly named Dagger Doctrine makes the Rhienn a superb anti-short range fighting vessel, as it deals 100% additional damage to these shorties.

The Offensive Profile Rhienn also happens to be equipped with dual Projectile Weapons. This unique Romulan armament occupies a different weapon and damage category than typical Pulse, Beam, or Torpedo-style weaponry. Unlike Pulses or Torpedoes, Projectile Weapons don’t deal less or more damage to any particular Profile, making them equally effective against Stations, Offensive, or Defensive units for instance. While that means the Rhienn isn’t a great raider (recall that Civil units take much more damage from Pulse weaponry), the Rhienn is quite efficient at killing off Defensive vessels like the Monsoon. Likewise, if you’re firing at some Sabers, you’ll know that your Pulse weaponry has a chance to miss, due to the Saber’s Tiny ECM Suite passive. However, Projectile Weapons don’t miss, making them a better choice here.

The unrefitted Rhienn also happens to be one of the Romulan’s fastest warships. It can easily outpace a Saber and almost keep up with an Intrepid. That’s a good thing too, because the Rhienn is a short-ranged vessel!

All in all, the Rhienn is a short-ranged, Projectile Weapon-armed, anti-short, fast predator. A mix of Rhienns and Generix thus allows you to dispatch your opponent’s Short and Long ranged forces in short order.

However, with all this talk about weaponry and specialist countering, we haven’t yet talked about the Rhienn’s most special aspect: it’s Phase Plates technology. Just as in 3.2.7, Phase Plates is a nasty defensive technology. However, Romulan engineers have come up with fiendish new designs, resulting in some critical changes.

In Version 4, when Phase Plates are activated, the Rhienn shifts partially out of phase, thereby reducing all incoming damage by 80%. Unfortunately, this shift comes at the loss of both weapons and cloak, which cannot properly account for the phase differential and might even be unstable! For the duration of its 60 second ability, the Rhienn will not be able to fire or cloak out of combat. 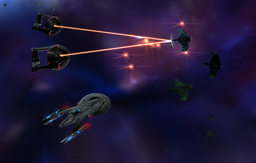 Gameplay wise, Phase Plates thus become a micromanagement heavy ability. If you force all your Rhienns to activate their Phase Plates, you’ll deprive yourself of critical firepower for a very long time. Shifting one at a time is the best way to go, but your opponent can just as easily switch targets. In the best of situations, Phase Plates can be used to annoy your opponent, as you place a difficult to destroy unit in the midst of his or her forces. Phase Plated Rhienns thus can become the poor-man’s Defensive vessel. Phase Plates can also be used to save heavily damaged Rhienns, but you won’t be able to cloak retreat. As these Rhienns still take damage, once their shields are gone your opponent may simply decide to beam aboard. With the Rhienn’s relatively low crew, it’s wise to beware of such a crafty enemy.

Join us next week for more Romulan scheming!