In our next version of Fleet Operations, ‘turrets’ have a unique Profile. Structures built purely as defensive emplacements are henceforth known as “Platforms”.

In version 4, it is no longer possible to simply park a Monsoon in front of a Platform, cycling in a new one when it eventually becomes damaged enough. All Platforms will now try to target a new enemy with every shot. Platforms thus serve as some sort of pseudo-area damage inflictor, which gradually damages your opponent’s raiders, so that your own fleet can quickly mop them up. In many cases you should thus expect to build a handful of Platforms to mount a defense capable of holding out until your real damage dealers can return.

In version 326, all players know the usefulness of Federation Platforms - you can set up these cheap structures all over the place and at the drop of a hat, begin transforming them into pretty powerful turrets. Federation players are thus often requested to set up turrets at friendly expansions. As a result, these are usually the most common type of defensive structure to be built in team games, as most other factions rely on expensive and powerful turrets, or turrets that need to be built in numbers to fend off attackers.

In our next version, we have adopted a new ethos for Federation Platforms, which synergizes with their altered playstyle and reflects a new mentality for map control and scouting. 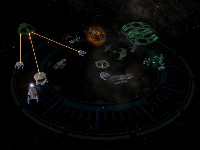 As has been described in previous newsposts, the Federation is not a faction that has access to Offensive units immediately. Similarly, most of its Offensive units do not pack as much of a punch when compared to other military-minded factions, like the Klingons. A Federation player thus relies on special abilities and vessel mixing to create a flexible and mobile fleet. Just as in 326, our version 4 Federation units have much stronger than average defensive capabilities.

These attributes conflict with individually strong Platforms. A faction that has excellent Defensive Values to allow retreats under heavy fire, as well as a plethora of easy-to-field special abilities should not also be able to place a turret or two at a resource moon and have it be well guarded.

Consequently, Federation Platforms are individually weak. The Pulse, Phaser, and Torpedo Platform have smaller Offensive, Defensive, and System Values than in 326. Of course, this has resulted in cost scaling, such that these Platforms are also a bit cheaper than in 326.

However, just as a faction that can cloak - striking without warning - or one that can assimilate the map below to further its needs, the Federation has a means to ensure map control too. It is here that Federation Platforms particularly shine.

In the new version of Fleet Operations, the base Federation Platform has a low build time - 20 seconds. The upgrade times for each type of defense take longer than 326, but are still quite manageable. Obviously, this allows you to set up many defenses quickly, such as ahead of a large enemy attack. However, this also allows you to use cheap Platforms to harass and distract your opponent, as well as set up Platforms to aid in a push against an enemy. A good Federation player should thus expect to use his or her constructors to set up Platforms not only at friendly moons, but also potential enemy ones. Bringing a constructor along for an attack - or sending one to create some distraction Platforms - becomes an important tactic to seize map control.

In the later stages of a game it might become quite difficult for a player to risk sacrificing a valuable constructor. Lucky for a Federation player, the Mediterranean isn’t the only Platform builder. The Nebula Class Rigel Type and one of the Newton upgrades (Replicator Suite), have the ability to lay down an unupgraded Platform every minute.

Next week we’ll talk about some important Federation abilities and vessels that synergize with Platforms. ‘Till next time!