Topic Starter
238 posts
I have been meaning to get into FO modding, and as a pet project to learn the ropes was tweaking the Prometheus ODFs as a mini-mod. She's one of my favourite Fed ships, and noticed the guide apocrypha entries on the devs being unsure what do do with her. Also noticed the model in game (and in many mods) is almost as big as a sovereign, but in a lot of canon references she's a lot smaller (the Akira is actually bigger than her!).

While working out scaling her, thought I could use my pet project to try out concepts for Prometheus stats and abilities, to learn as I go. First steps were surprisingly quick and I found I could get a few initial ideas working with just ODF tweaks and a couple of new weapon ODFs. As it's a working Alpha and can run as a mini-mod decided to pop it up for anyone who fancies a laugh (see attachment at bottom; as it's so small can share here). If you pop the folder in the ZIP into FO's 'Mods' folder and then load it using the Mod Manager, it should work (you can add a Prometheus to a game using the editor under Fed>Uncommon ships).

I've done some vague balancing but this alpha is likely OP in truth (her weapon in base FO was the Sovereign phaser, so I've given this alpha custom tweaked versions of a rank 4 Sov's weapons). I'm imagining her as a map-unit special (head-canon was they never built any more Prometheus-class ships, so she's one of a kind and sent only on special operations). She can likely mow through a lot of ships one-on-one, but is no match for a Dom dreadnought. Her phasers use the Mark XV mechanics from the Rank4 torp nebula (an FO-era upgrade for her).

Cheers for your time. If you give this a try enjoy, and feel free to post any comments and will keep them for when doing future iterations.


What is different?:
First big differences are that SOD is downscaled to try for canon size (still considered a Battleship), and moves much faster in her combined form (120). This included avoidance tweaking to suit her smaller size. Her shields also regenerate noticeably quickly (to represent her regenerative shielding; this will get a passive icon when I learn those). Her special energy pool is 500 instead of 1000 but recharge rate has been halved too. For now her damage stats match those of the Sovereign weapons. Am imaging her like a sibling to the defiant, tuned towards taking on battleships and borg vessels. She is meant to have the ablative armour passive but I get the impression implementing this would mean modifying a lot of other ODFs (as it looks like it's done using weapon stats) so leaving for now.

When you activate her MVAM the three modules move slower (100, debating making 90) and their weapons are slightly weaker (phasers fire only once, one less torpedo is fired by each), but when all three fire on the same target the firepower comes in vaguely 1.5x the combined one. In later version they will also count as destroyers while separated. For now the modules are the same, but potential idea is the 'Alpha' section (the saucer one) becomes more tuned towards boosting the two 'combat sections' in battles.

A key mechanic I have in mind (and partly implement here, but unlikely to be fully working) is that while in MVAM the phasers and torps ignore ship ranges and passives stats; they do full damage to any target (though torps still miss); assume ECCM systems and high end sensors are allowing this. This makes the Prometheus a useful counter-vessel if an unexpected ship appears.

Though they have better combined firepower, the shields of the sections are a lot weaker (both strength and recharge), and special energy recharge and system repair times slower compared to the combined ship, so in sustained fights they should recombine occasionally to repair. A possible future idea is them draining special weapon energy too for some of their combat abilities and they weaken if it runs out, making re-joining more important. Am tweaking the integrating ability so the parts should re-join a bit quicker than the default would. 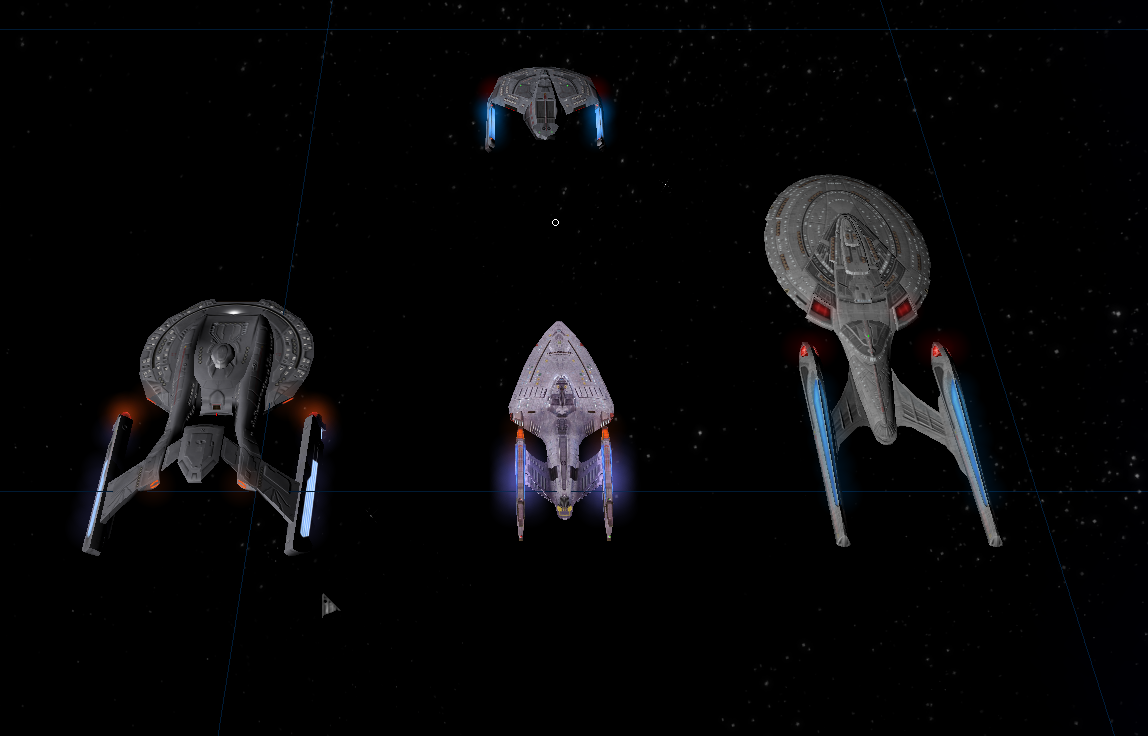 Donator
1359 posts
Good to see someone taking a whack at it! In fact, our tiny modding community is much more active now than it was 2-3 years ago and we have frequent discussions about it on the Discord server. However deep you want to get into modding, you'll be able to!

The laundry list of future changes for my mod is basically infinite, but one thing on it is to create a small campaign. A ship like this is quite useful for things like that.
Reply