Donator
Topic Starter
1368 posts
It's here! I mostly post updates on the Discord channel these days, but progress is ongoing.

I released Version 4.0.0 around Christmas, but in my rush to get it out, I left a lot of bugs and crashes in the code. After a few weeks of cleanup I've just uploaded V4.0.5 which should be pretty stable.

The download link will never change, since it links to a folder where I swap out the files. I'll also start including a Changelog file in the folder, so you can check it out to see everything that's changed

- it's crashing as soon as you try to build a torpedo, phaser or pulse turret. (fed)
- sometimes ships won't leave the shipyard when you order them to repair (fed)
Tryptic

Donator
Topic Starter
1368 posts
Bumping for the release of version 4.1.3.

This time I did a deep, deep pass over all of the Borg and Romulan code, optimizing and refactoring things. I believe I've caught all the bugs, but work is naturally ongoing.
Dragi

Donator
21 posts
Nice work, but... I've found a really annoying bug: The Newton class is useless now, cause it's not doing anything without a specific manual order. The automatic repair doesn't work anymore and the button is gone.
Tryptic

Donator
Topic Starter
1368 posts
Sorry about that, I'm in the middle of a full testing pass and the Federation are last on the list, but I'll fix the Newton by the next version, I promise.
Dragi

Donator
Topic Starter
1368 posts
It's still available in the archive section...but it had a major bug. The Command bonus sets ship damage to 0

I'll have another version in a few days with plenty of fixes.
Tryptic

Donator
21 posts
The new version looks good! But the game now crashes after some time. In the past two games each time my streamrunners wanted to fire at an enemy ship - once against Borg, then against Dominion. 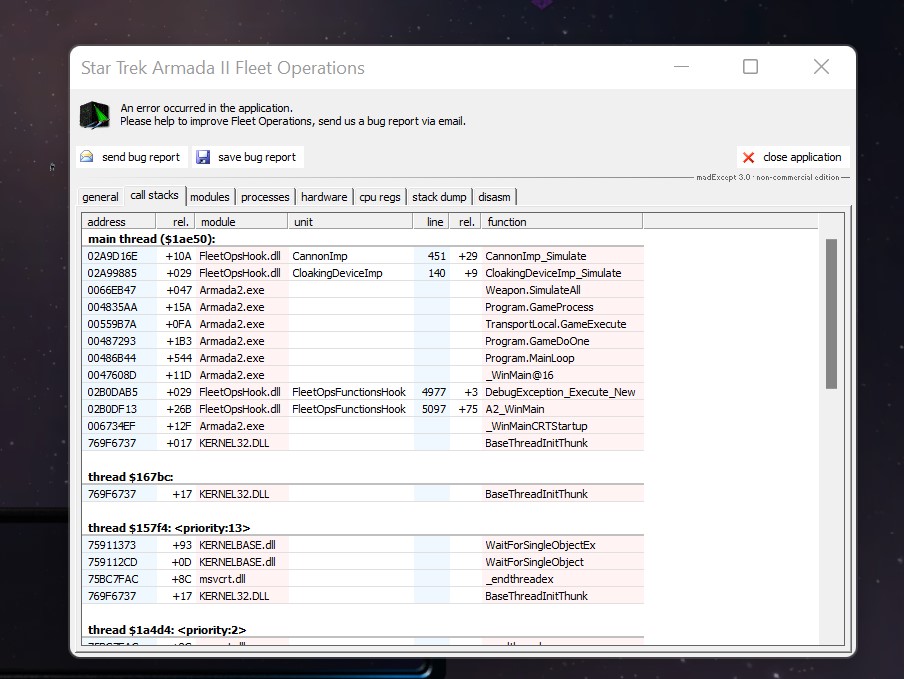 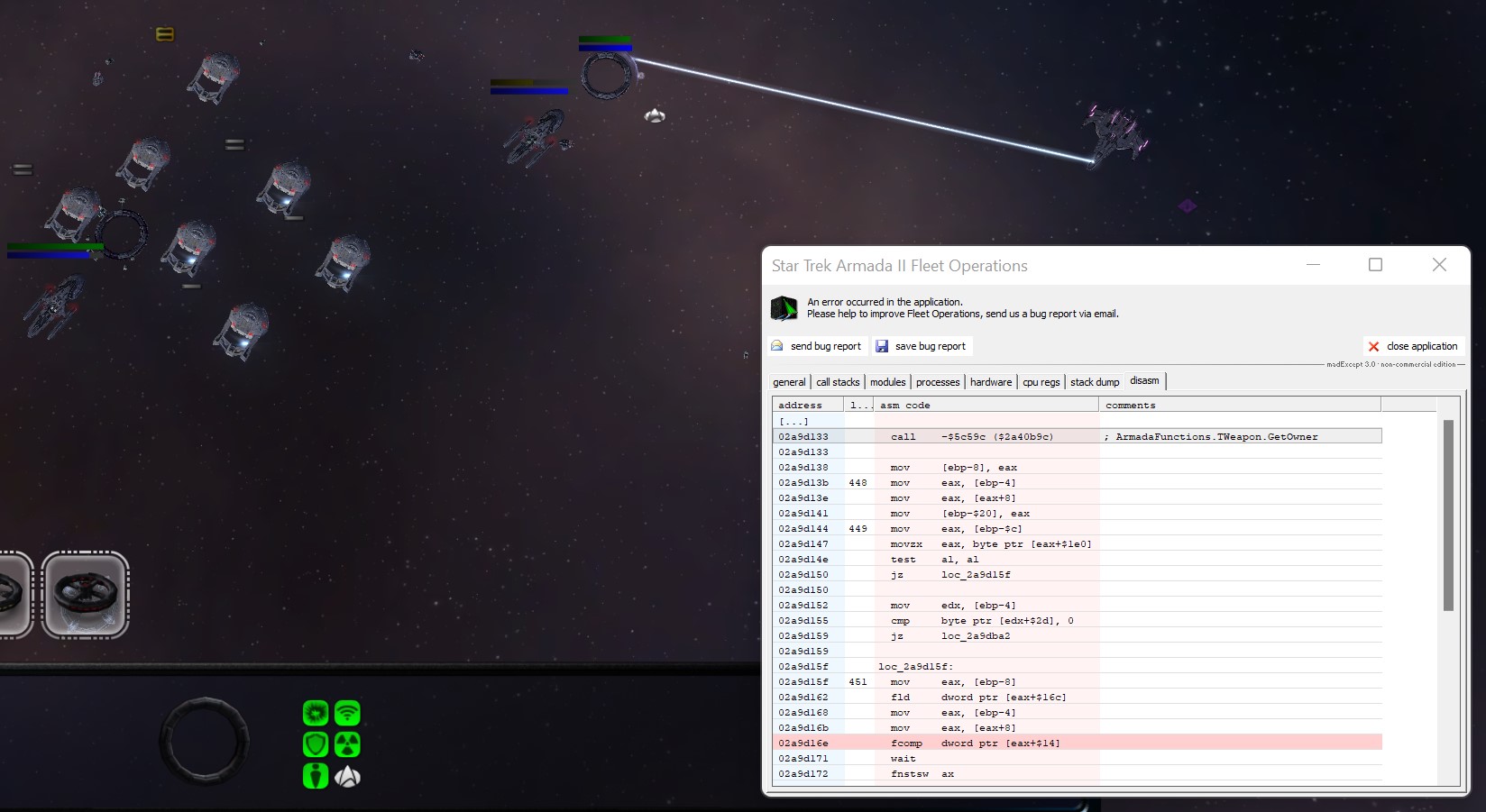 18 posts
I just can't get this mod to work or the vanilla Fleet Ops.

However, none of Trypic's mods work at all.
1) Running on a Vanilla Fleet Ops - crash on launch
2) I tried replacing some game files with the Dominion War Mod ones and can now get Tryptics latest mod to not crash on startup, however, starting any instant action game won't give me any control - just a rotating 'Error!' message on the star map at my starting position, with no control over my ships. I can scroll the map and see other AI players building but I can't do diddly.

Very frustrating as I really wanted to play a different mod, but looks like there's something in Tryptic's versions that won't work (Win 10 64 Bit).

So there must be something that is in these 2 mods above (filewise) that is not in the vanilla Fleet Ops that makes it work.
Tryptic

Donator
Topic Starter
1368 posts
So to clarify, you can't play Fleet Operations version 3.2.7 with no mods at all?

If this is the case, my guess would be that a security program is blocking one or more files from being installed in the first place. Tryptic's Mod probably doesn't change those files, and tries to load the original, while the other mods replace them with different versions.
Maverick

18 posts
So hopefully to clarify:

Install of Vanilla Fleet Ops 3.2.7 will launch, but on any instant action game launch will crash with the usual fault.

If I instead load the KA2 EAW Mod and start an instant action game it works for a while and may crash at random times throughout the game.

If I install the Dominion War conversion as a stand alone install - I can play that straight away on any instant action game without any crashes whatsoever. I then tried to see if I could load another Mod from within DWM and could get Tryptic's latest Mod to load, set game options and launch - but as said only the AI players are working - no control of human player.

So as things stand I'm limited to Dominion War Mod at present.

I was just making the point that there must be some key files in DWM that are not in the Vanilla Fleet Ops that make it work.

1) I should also say that I have tried all the compatibility options to no effect (including applying these to the Armada2.ldl file with no difference so defaulted compatibility back to none.
2 Have changed the FODaya.ini to both D3D9=False and True - which made no difference either on the Vanilla version.
3) Also copied a Win 7 install of Fleet Ops (as also mentioned on the Forums) over and no difference at all.

I think I'll just have to stick with the DMW as that at least works, but I'd love to know what it is that makes this work and the vanilla not!

Thanks for reading anyway.
Tryptic

It is possible that the crash is being caused by a bad config. I've seen the game crash in such a way that it leaves a bug in the config files, and after that it will keep on crashing until you go in AppData/roaming and delete the right files. It's certainly worth a try in this case.
Maverick

Yes, tried all that and deleted everything in that folder to eliminate corruption / config problems and reinstalled everything from scratch to recreate them.

What is odd is that I can go from running an instant action game in the vanilla FO, which crashed immediately launching, but I can exit that and run Dominion Wars Standalone perfectly well, so this tells me there has to be something in the DWM files that my system likes!

Shame as I was itching to give your mod a go!