So, I've decided after years of fiddling with it, to finally call KA2 "done". She stands as complete, polished and bug free as I can make her.

Therefore, new project needed yes? Something I've had in the pipeline for well over 2 years, but finally got around to doing.

I feel like with KA2, things got a bit overly complex, some ideas didn't quite work how i'd like them to, and I wanted to do something a little "cleaner". Closer to the original Armada, both in setting and play style, but with my own touches on it.

I am tentatively titling this project "KA3: The Lost Years".

Setting wise, as the name might suggest, I am going for somewhere between 2320 and 2360. Current plans are for three races only (Federation, Klingon Empire, Romulan Star Empire) with the possible addition of a fourth (Cardassian Union) at a later date.

Each race will be split into two eras, roughly speaking. There are early ships, which are hold overs from the TMP Era, very early "Lost Era" models like the Constellation and the Centaur, and then the late ships which are closer to early TNG. Not everything gets replaced. For example, Federation build tree looks something like this.

Non-Combat vessels are being cut down to three, Construction, Freighter/Support, and Colony ships. Again, early and late variants. Not sure exactly at this point how I want the research tree to go, or whether I want the Early TNG ships built in new shipyards or not etc. Each race gets a "Special" ship. As mentioned, the Federation gets a Science Cruiser, the Klingon Empire gets an Assault Cruiser (for boarding ships and stations) and the Romulan Star Empire gets an Surveillance Ship (think something akin to the Shadow Class from Armada)

The Klingon Empire and the Romulan Star Empire still require Dilithium and Tritanium. The Federation, now that replicator tech and so forth is becoming commonplace, have a single resource, Supply. Gathered in the same way as the other two materials, from the same sources, but the Federation can essentially transmute them at will now.

The final resource is Science. This is a period of great discovery, and I hope to try and replicate that. Science is gathered from planets, for the most part. Dilithium is mined in the same way as always; Freighters mining moons (Federation can also gather supply this way), but Tritanium and Science can only be gathered by building a suitable outpost around a planet. Only one such outpost can be built per world, and it will either gather Science OR Tritanium, not both. Some worlds will be more valuable scientifically than economically, so building your outposts accordingly is important. Science of course is used for all research projects. The Federation have one final method of gathering science, and that is anomalies. They have access to the Nebula Class Science Cruiser, and this ship can gather science from various anomalies scattered around the map.

I've decided to build KA3 on the basis of KA2. What this means is that ships from KA2 remain essentially unchanged, with new vessels balanced against them. Also whilst I will be removing older ships from build lists etc, they will remain ingame as map units. There will be some small changes for units that span both eras, for example the Oberth will lose her ESPlaDs Cloak detection system, ships will be reclassified (Miranda from a Light Cruiser to a Frigate etc) but they will essentially play the same.

Current mod progress is good. All the balancing has been worked out for the initial three sides, all required ship models sourced (still debating on certain station models etc, whether to go for more TNG styled stations or stick with older ones). All Federation ships have been fully coded (except for the scientific functions of the Nebula Science Cruiser), and the Klingon combat vessels have been coded too (just the Non Coms to do). New weapon textures and sounds have been sourced, and once I have all required vessels in game, coded and functional, then starts the task of changing the sides from TMP Era ones to TNG. New or Modified GUIs, sound effects, maybe new station models etc.

I'll post some screenshots later and maybe a video, if I can get my capture software to finally work with FleetOps that is...
picard456

350 posts
Very cool, I've always wanted to play armada with this timeline. I am going to give it a shot.
picard456

Topic Starter
724 posts
Not sure at the moment. Depends if I hit any snags with the new resources. 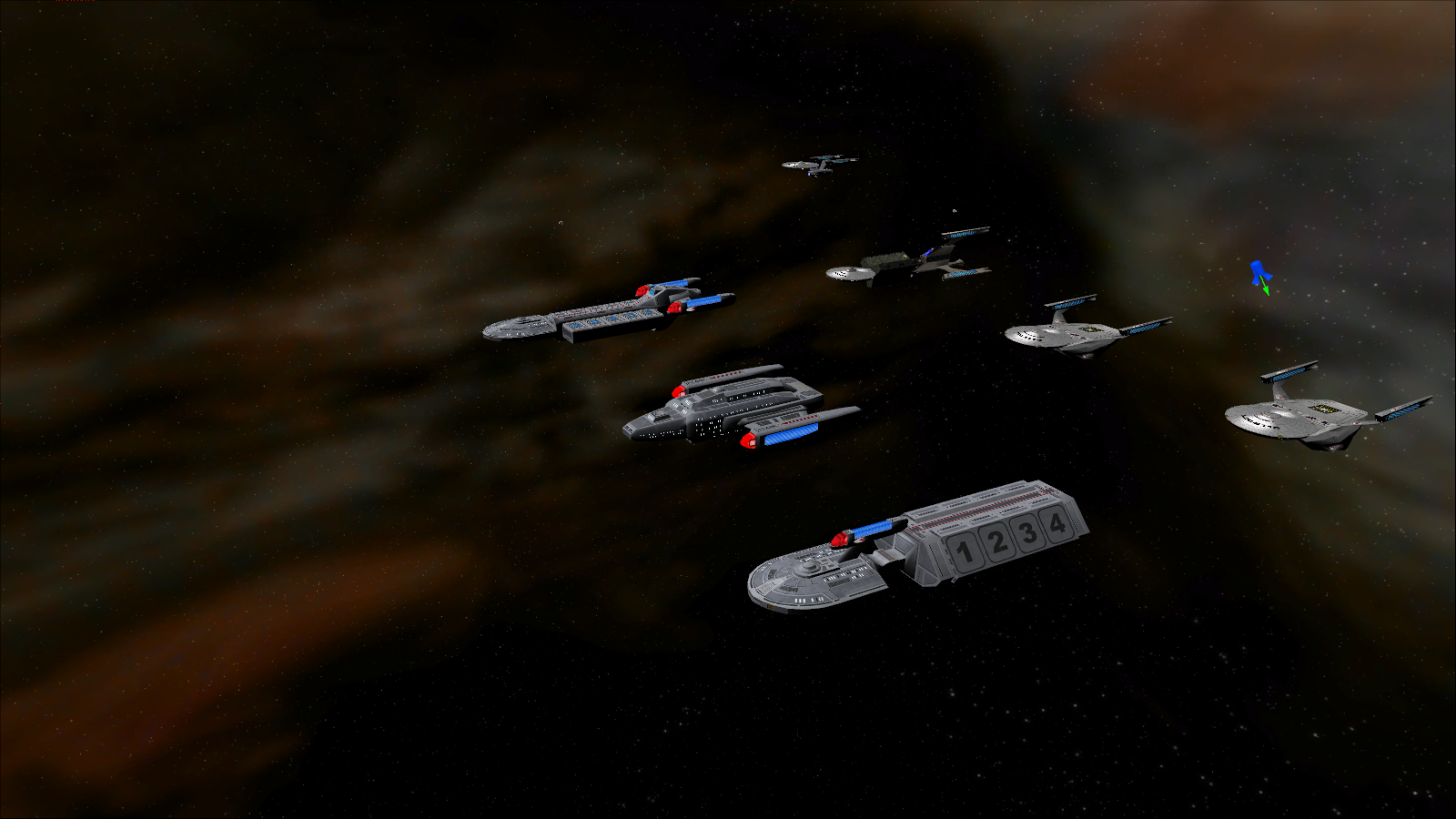 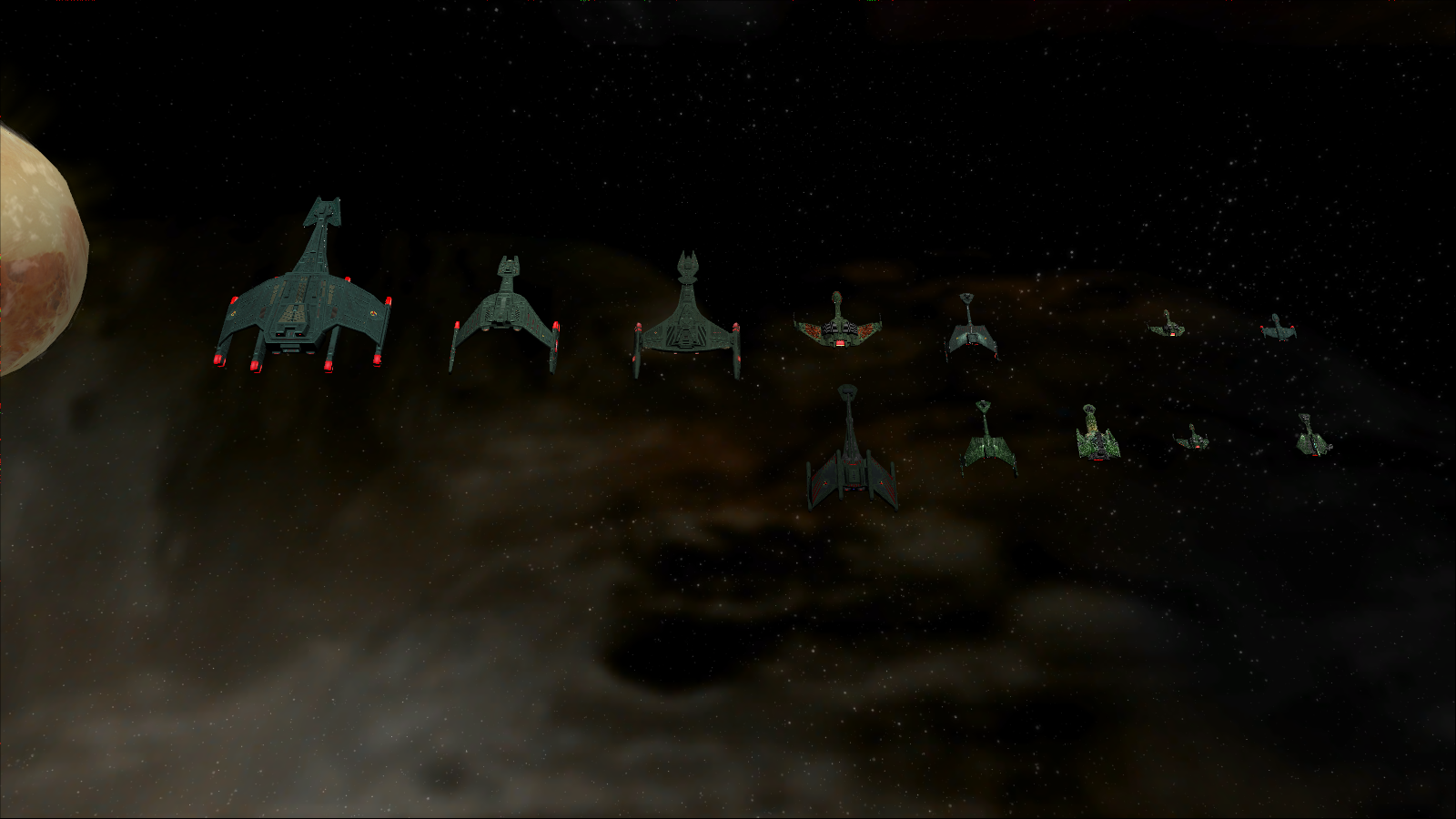 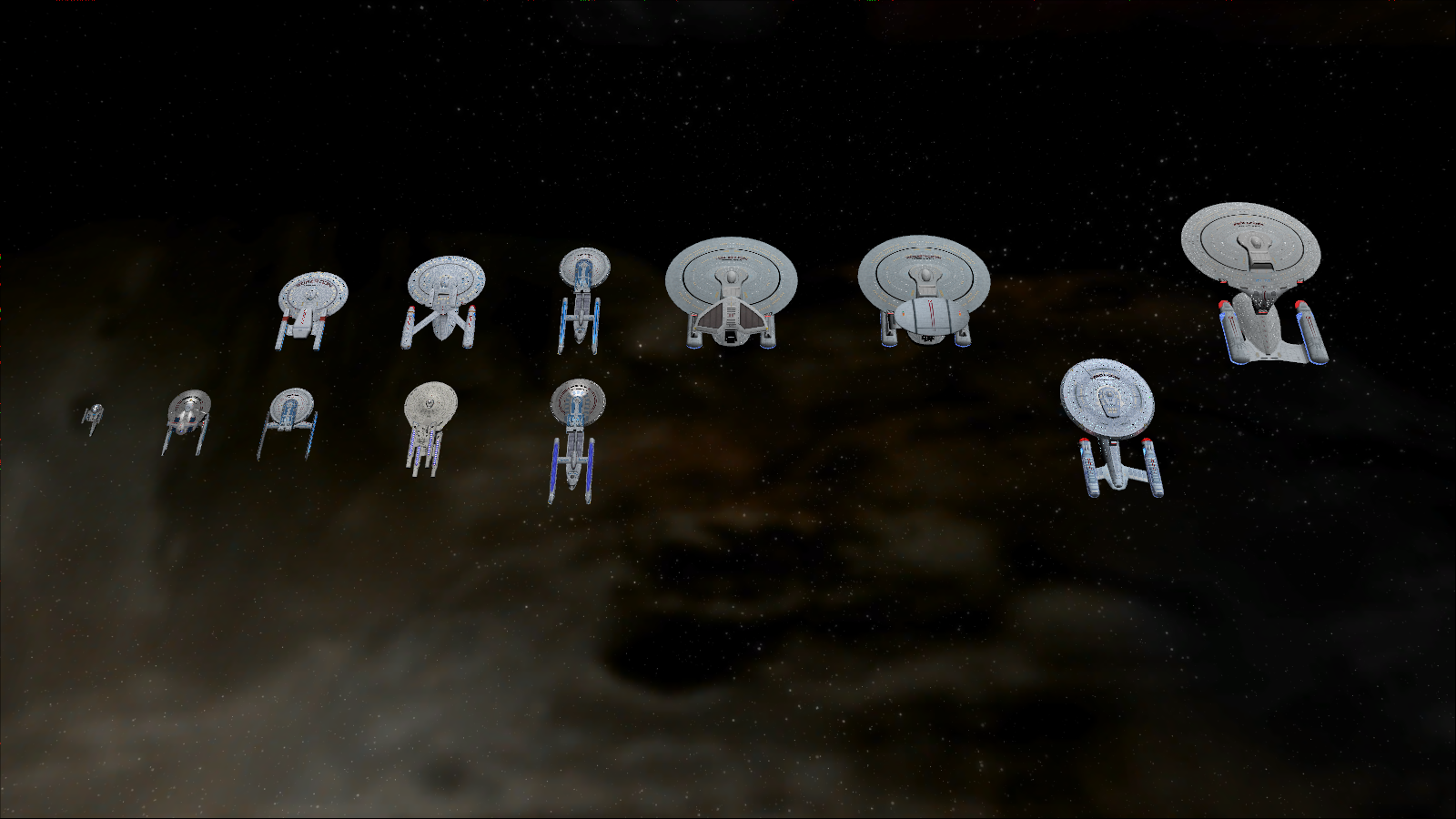 350 posts
Are you using Aad Moermon's models? Some of them look familiar.
picard456

350 posts
If there is someway I could help, I would be glad to contribute. but my skills are limited.
Squire James

Topic Starter
724 posts
Some are from a Star Trek Legacy mod, as I couldn't find suitable Armada models. The Constellation is a stock Legacy model I backconverted. The rest are from the STA Project 2014 build. Unsure who made them. I've modified most with different hardpoints, cleaning up alpha layers (as they were done badly in a few cases), added registries where I can etc.

I was going to use the Koloth model from STA 2014 too, but it didn't look right alongside the K'T'Inga I have, so I made my own.
picard456

350 posts
I was interested in making my own TMP era mod for fleet ops but after making my dominion war mod, I am tired and don't want to continue modding for a while. To see you working on this makes me very happy.
Squire James

I largely finished KA2 about two years ago, with the last patch (before todays, final patch) being May last year. Also finished my Looooong term mod for another game about the same time, so, it's been a while since I did any modding, and I have worked on this for the past 2 weeks without saying anything (and the plans go back about 2 years, as I said).

It isn't a process that can be rushed 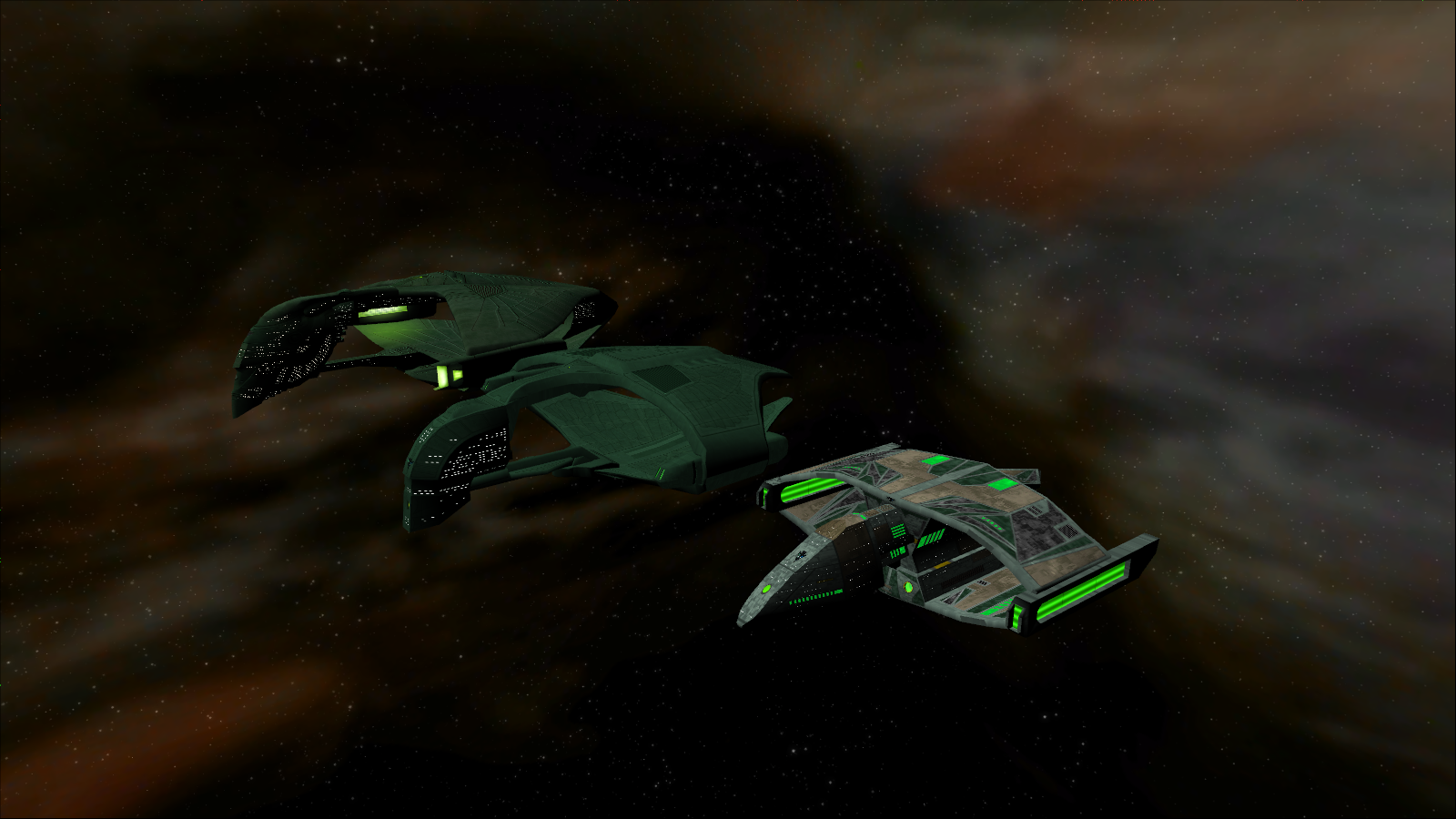 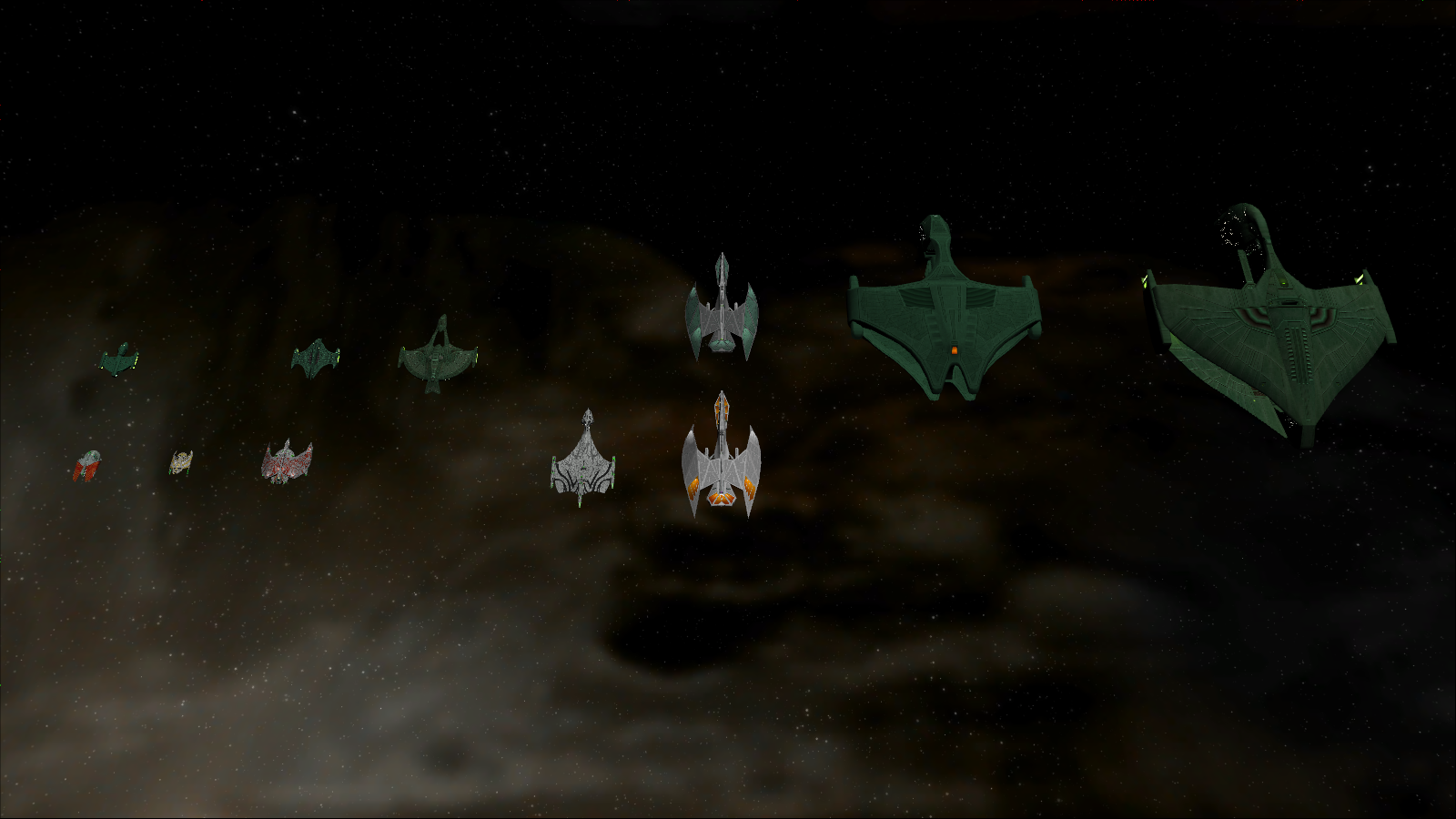 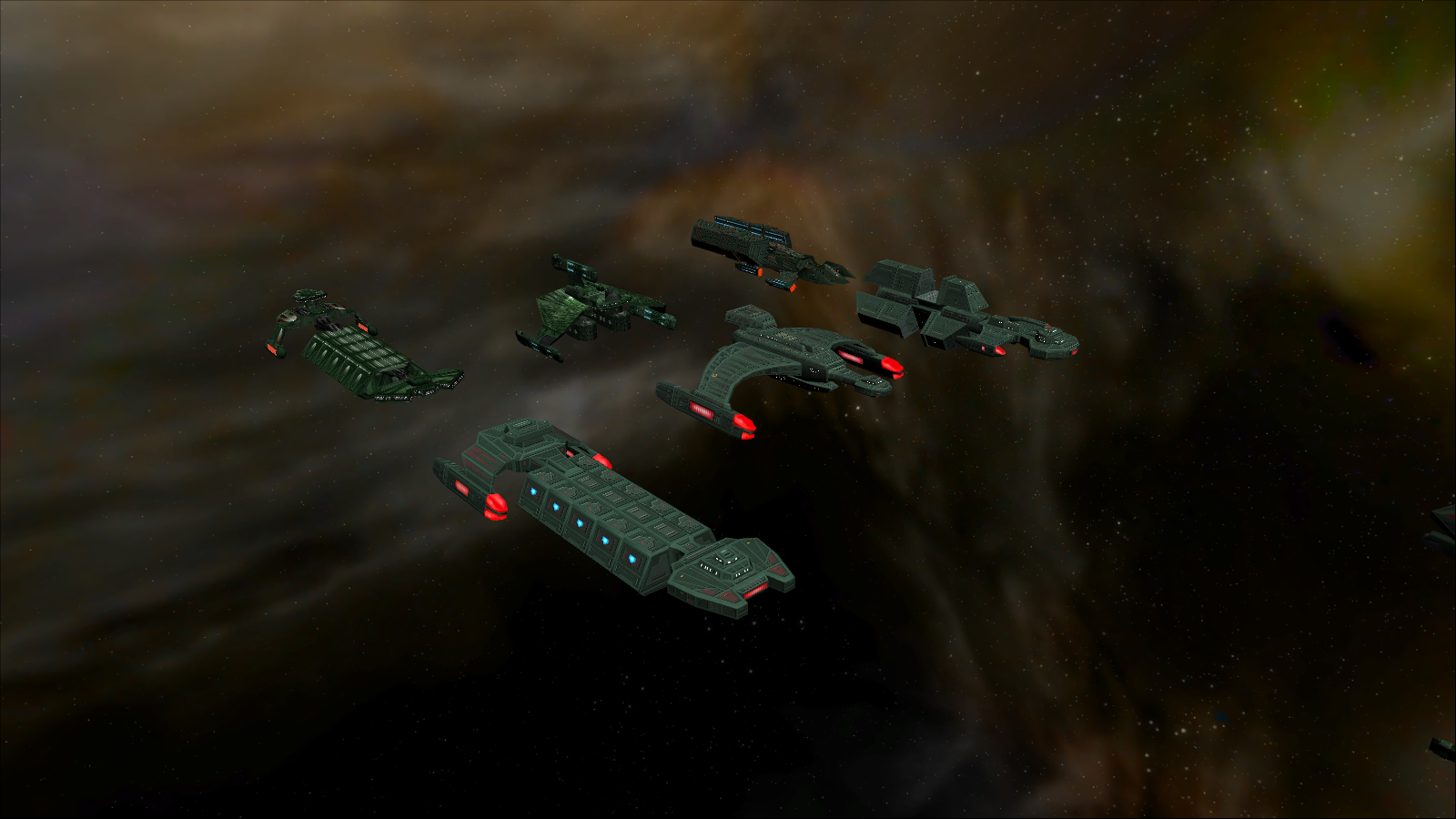 4 posts
Hello, I am very excited to hear about this mod, though I may be biased since the TMP/TLE timelines are my favorite

Having three races will help with balancing the mod, though I'd love to see what you would do with the Cardassians. And admittedly the Lyrans (Hey, a guy can dream >.>).

Also I am loving that TMP Warbird (War Eagle?), it was one of my favorite Romulan ships to play in Starfleet Command, you've done it some justice

Topic Starter
724 posts
Well KA2 is done and has been out for ages, so, get your TMP fix there

The War Eagle won't actually feature in KA3 as a buildable unit. They're out of service by this point (replaced by the AQS powered Melak). Will be in there as a map unit though.
Icewolf132

4 posts
Oh I know, I've played the tar out of it

Well, makes sense. With their rivals building better and more powerful ships, the Romulans would up the ante. You can't win a battle with ships that are generations old...well, save for the Klingons, but they're crazy enough to make it work.
Squire James

Topic Starter
724 posts
So far the balance is a little...interesting.

The Klingons have rate of fire, the Federation have shields and armour, and the Romulans have pure firepower and stealth. It will be interesting to see how it plays.

Also, I intend for the Federation and the Romulans to only be able to produce a single example of their Super Ship (Galaxy and D'Dereidex) but the Klingons are able to build three of their QeH'raLs, as they are older ships and are lacking in defensive capabilities compared to their Federation and Romulan counterparts.
Squire James

Topic Starter
724 posts
Thought I'd keep you all updated.

I can't seem to remove the Borg/ISC as a playable race. Every other race I can comment out the "InstantAction" line and it works fine. If I do that to the Borg/ISC it crashes when I click Instant Action.

Sooo, for now, having to leave the ISC in, but that really doesn't fit my plan. I could turn them into the Cardassians, but I wanted to add them later once the main mod was done. We'll see anyway.

Also, not entirely sure if I can get the Science idea working as I would like, and for now I am leaving the Federation with Dilithium and Tritanium just until I get the mod in a working state.

But, now onto some successes. I've changed the main menu screen and music (used the main menu music from the old 4X game Birth of the Federation. Works very well for this period). Changed the buttons to Federation sound effects, A2 colour scheme, returning the menu screens to slate grey etc. Might seem a retrograde step but, I want KA3 to feel cleaner and simpler than KA2 did. 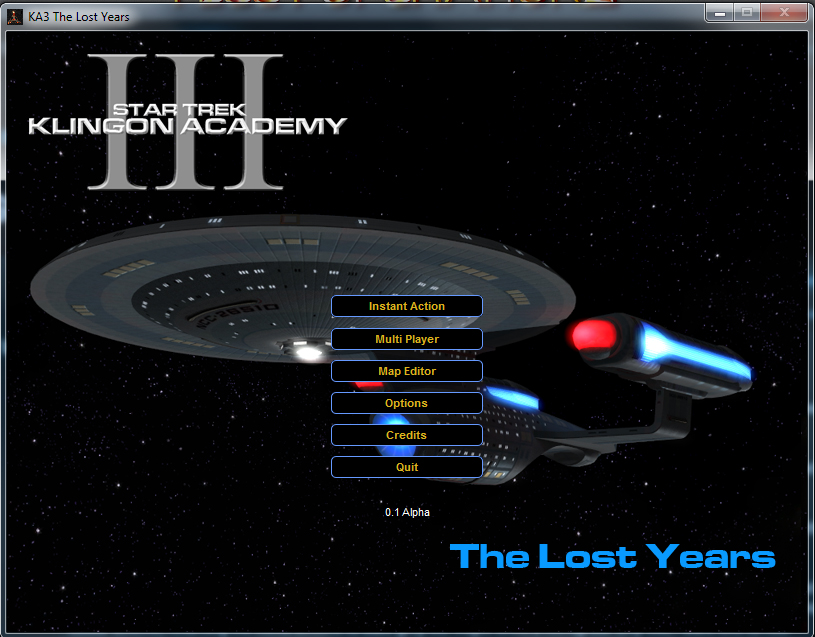 I've also worked on a new GUI for the Federation. I've tried to combine together the styles of LCARS 1.0 (the style you see in the TMP Era, with green and blue screens) and the later TNG style LCARS. So, here is my "LCARS 1.5" TLE GUI. 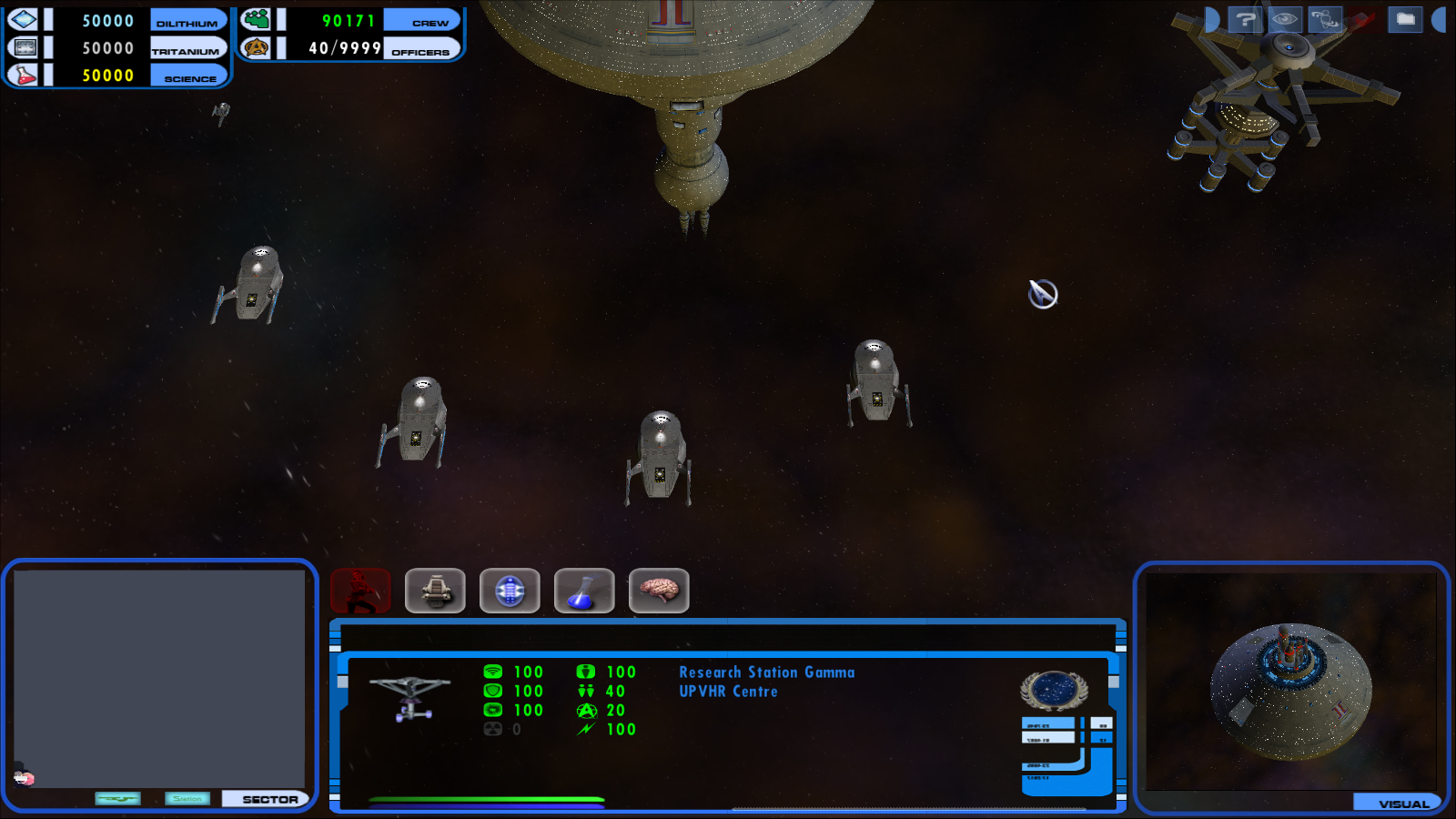 On the books for today is sorting out what the building and research tech tree for the Federation will look like. I am thinking something basic, just a research project for each new class divided into two periods (think something Age of Empires esque)
1, 2
Reply