Talk about anything related to old versions of Armada.
1, 2
rifraf

Cabal meantioned in an A2 Files forum post that Elronds shields are actually inside the normal bubble or something to that effect. Did anyone ever correct this or is there a way to use his shield mod and have the phasers/photons impact the actual shield bubble correctly so the visual displays properly?

If I switch back to thestock Xshldx01.SOD then all shield impacts display properly. Is there something in the SOD that can be adjusted?
Thanks in advance
cabal

673 posts
I actually made my own blue shield mod that corrects that problem while also giving the shields a curve and keeping the color transition based on shield health. You can grab it here.
rifraf

Donator
Topic Starter
396 posts
I actually have that dowloaded from years ago but had never tried it. Only getting around to working on my shields now. I'll give it a try.

I don't mean to question either, but this is for Armada 2 so I still edit my light.spr in Armada 2 and not the explosion.spr? I just wanted to be sure.
cabal

673 posts
I don't think it actually matters which one you put it in. The game looks for sprites in Sprites.spr and that directs it to the other files with a few @include lines. You could put it in Cursor.spr; it should still show up. I'd still put it in Lights.spr though, since I know that one works.
rifraf

Donator
Topic Starter
396 posts
Ok, just tried out your blue shields and it's nice to see the weapon impact the proper location again.Really cool effect and I kind of dig the look and color as I've gotten used to the ripple/water look of the sheilds being hit, but I'm trying to get explosions when the weapons impact the shield.

I put the explosion effects from Fleet Ops in my A2 personal build and was using one of their shield textures as well, one of the Romulan green water effect ones but just wanted to also have the impact explosion effect. I'll have to keep messing with it some more. Great mod, can't believe I never tried it all these years.

Donator
Topic Starter
396 posts
I'm trying to wrap my head around .SOD's. Can you give me an explanation as to why your shields are round where as Elrond's are flat? Is it how you built it to look in the .SOD? Can one take the stock Xshldx01.sod and just add an explosion to it, presumably like Elrond did but maintain the size of the shield bubble and keep it round?
cabal

Can you give me an explanation as to why your shields are round where as Elrond's are flat?

Elrond's shield model is composed of a single sprite. For some reason, the game has trouble scaling things if it doesn't have a mesh, hence the distance from the ship. I have no idea why and I didn't find that out until I started working on my own shield SOD. When I made mine, I solved the problem by creating a sphere, cutting it in half, and placing the sprites at vertices (just for reference, there is nothing special about the vertices).

Using multiple sprites also allowed me to create a curve. Where Elrond used a single flat sprite, I used several sprites with the billboard tag (done the the SPR file) arranged in a hemisphere. The billboard tag turns the sprites to always look at the camera, in comparison with the sprite Elrond used which had a fixed orientation. I mostly just did that because Elrond's shields could completely disappear at the right angle and it bugged me.

The color was surprisingly easy to do. At first I thought there would be some sort of tag that I would have to add to the mesh group, but I was bored and did some experimenting with swapping ship SODs in for the shield SOD and discovered that the game was just hard coded to tint whatever happened to be used as the shield model from green to red. But it just colored the mesh, not the sprites, as Elrond had already figured out. Filtered through the blue sprites, I got the blue to reddish-purple status color thingy. The attached screen shot shows what I'm talking about with the Intrepid on the left having high shields and the Intrepid on the right having low shields. 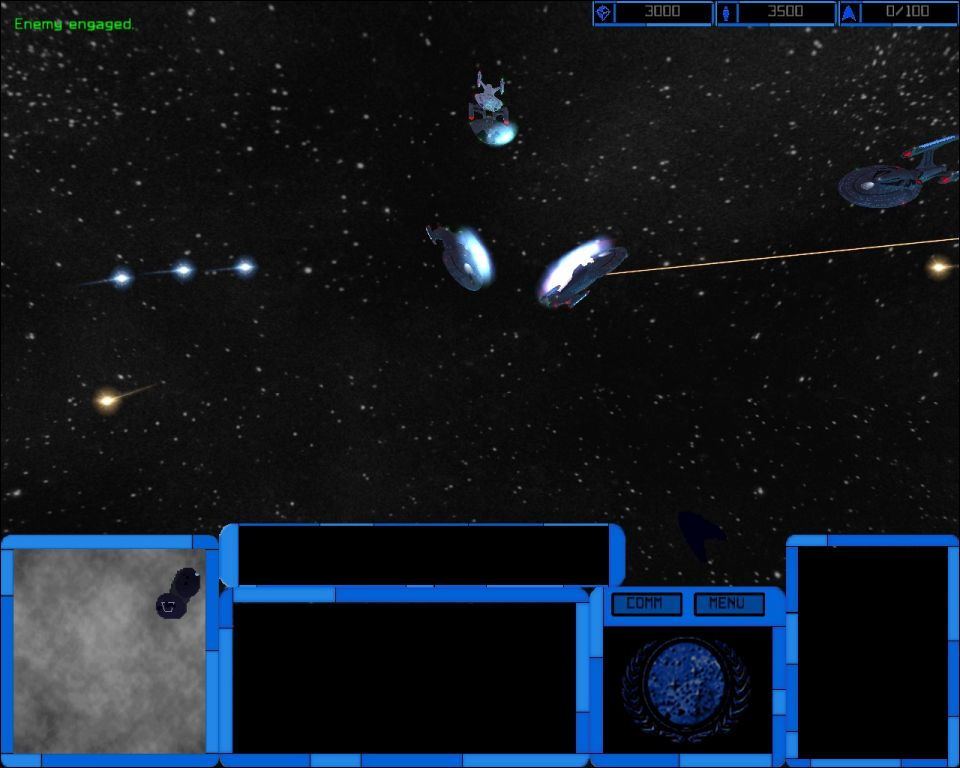 Can one take the stock Xshldx01.sod and just add an explosion to it, presumably like Elrond did but maintain the size of the shield bubble and keep it round?

So long as the model imports properly, then it should be as easy as adding a couple hard points to the model. I think I may have had some problems importing that one, though. I know I had problems with the background meshes that A1 uses.

If you want to mess around with mine, the model uses three different sprite entries based on how far from the center they are. If I remember correctly, BlueShield1 has only one instance in the model, at the exact point of impact. You can try messing with that SPR entry and making it into an explosion sprite and see how that goes. If you get something nice out of that, feel free to release it. I'll even add it to the main download, if you're okay with that.

If you want something that goes well with either blue shield mod, try my other shield mod out.

And last but not least, I would like to thank Elrond for his work on the original Blue Shield Mod. If he hadn't released that I probably never would have been inspired to make mine, let alone figure out how to start. If you poke your head in here, Elrond, thumbs up!

726 posts
Thank you for that explanation.

it's something that has been bugging me for a while too but i've never quite understood the mechanics behind it enough to find a working solution.

I believe, do correct me if I am wrong, that with FleetOps since you can define shield impacts and such on a per vessel basis, it would be possible to have different coloured shields for different races?
Mr. Vulcan

That is an excellent idea, using smaller sprites to create a "curved" sprite. I think you can recreate the "ripple" effect as well if the sprites are arranged in concentric circles and given a slightly different animation offset. THat is, the center sprite would flare up first, then the next thing, then the next, and so on.

Donator
Topic Starter
396 posts
Yes Cabal, thank you for the explanation. I think I'm grasping what you're saying, but my abilities consist of adding ships/stations to my build, I can mess with sprites to some degree though some confuse the heck out of me.

I can look at a SOD and determine what textures go with it and also what sprites are referenced.

I've been checking some of the SOD tutorials but don't have a SOD program yet. Am familiar with Storm 3D to view the models though. Can you recommend a free SOD program?

I am still using Elronds mod and found a sort of reasonable compromise. On his shieldhit sprite reference he had // before the billboard and when the shields are hit it is a flat appearance like you described. I took out the // and even though the shield bubble isn't curved and it's kind of a large shield hit visual that faces the camera, at least it is almost visually perfect in that the weapon hits now are all but hitting and exploding on the surface of the shield itself.

I wonder, if I use yours and change the shield texture, then put an explosion texure in place of one of more of the bshield sprites what effect would happen? I'll have to try messing with it after work tonite.

300 posts
Have any of you tried out these shield modifications for A2?

I happen to think they are the best out there:

This one allows for the shield effect in Star Trek Legacy to be in both A1 and A2
http://armada2.filefront.com/file/Shield_Effect;98632

And this is Project Orange By Fahres, it has both shields and damage effects as well.
http://armada2.filefront.com/file/Project_Orange_Damage_Effects_Mod;99496
Terra_Inc

Cabal meantioned in an A2 Files forum post that Elronds shields are actually inside the normal bubble or something to that effect. Did anyone ever correct this or is there a way to use his shield mod and have the phasers/photons impact the actual shield bubble correctly so the visual displays properly?

If I switch back to thestock Xshldx01.SOD then all shield impacts display properly. Is there something in the SOD that can be adjusted?
Thanks in advance

For those who don't read the FF forums:

Achilles fixed this many years ago. His fix can no longer be found on the web afaik, but if my memory serves me right, I still have it in my archives. I'll try to dig it up.
rifraf

Donator
Topic Starter
396 posts
Last edited by rifraf on February 8th, 2013, 7:48 pm, edited 1 time in total.
@Terra: I do remember that shield bubble post and Achilles mentioning how to fix. I've been messing with Cabal's version, but since I don't have the means to edit a SOD I've been trying different textures and rearranging the sprite entries to see what I can come up with.

@Je_Mezu: I've used that shield fix effect for years in my game, really like that effect. I also use project orange minus the shield effects and also project blue by Fahres. I also have his gui mods although slightly changed in my personal A2 build.

There are so many talented modders out there for A2 and Fleet Ops, the two games I play, so thank you all for everything you've done over the years to give tinkerers like me something to do.

I've located in my archives what I believe is Achilles' Blue Shields fix. It's on gamefront right now, but it's not going to stay there very long so if you want it, get it now. I'll talk to Achilles and arrange a more permanent solution later. I know that he most probably wouldn't object to me uploading it anyway, but I feel bad doing it behind his back. (For those flopsers who don't know him, he's one of the dinosaurs of the modding scene, and creator of one of the best stock A2 mods ever, Art of War.)

Donator
Topic Starter
396 posts
Got it and will try tonite. Thank you Terra. Achilles, if you read thank you as well even though I'm late a couple years.