Talk about anything related to old versions of Armada.
OpetJa

I believe many of you are familiar with never(?) released Armada 1 mod called Future Tense... Authors of that mod were claiming that in their mod number of playable races would be 6
So, 2 more than original 4 races... How is that possible?? Is it coding? Or messing with ODFs??

Recently, I bumped on some Armada2 mod which contained 17 races!!! I didn't play it and I don't know is it scam, but sounds pretty interesting....

Can someone explain how to add more playable races in BOTH games than??
shadow_from_afc

61 posts
Adding a new race in Armada2 is quiet easy. But needs a lot of ODF editing in the end.

A tutorial can be found at:

Topic Starter
8 posts
I know this tutorial, however, my "goal" is to find a way how to add more races to Armada 1 !!

Because, Future Tense guys claimed they managed to do it... Besides, Armada 1 is my favorite so I'm always trying to find a way to improve that classic game
USSJasmine

95 posts
I'm not sure when it comes to Future Tense, I was really wanting to play that mod; especially the Sernaix but I'm more sure than ever that the Future Tense Mod is dead for even it's websites are dead. Personally I believe the team making the mod bit off more than they could chew and made so many exaggerated claims that they couldn't deliver on any of them or at least a large majority of them. Like you said they claimed to be able to get 6 races into the game but of course there hasn't ever been any proof of this so we really can't even know if they were telling the truth; especially when it comes to Armada 1. After all they also claimed that they had gotten the Borg to act like the Borg from the Star Trek series yet I can't even make that happen in Armada 2.

I don't know about Armada 1 but I do know that the person that was talking about his mod called The Ultimate Adventure Mod (STA2 UA) told me that he had 100 playable races in his mod but this was for Armada 2 using FleetOps. I've been trying to add more races to over the previously stated max amount of Armada 2 of 13 races but far less than that Mods 100; about maybe 22-24 races.

I still have a screenshot he sent me of just page one of those 100 playable races: 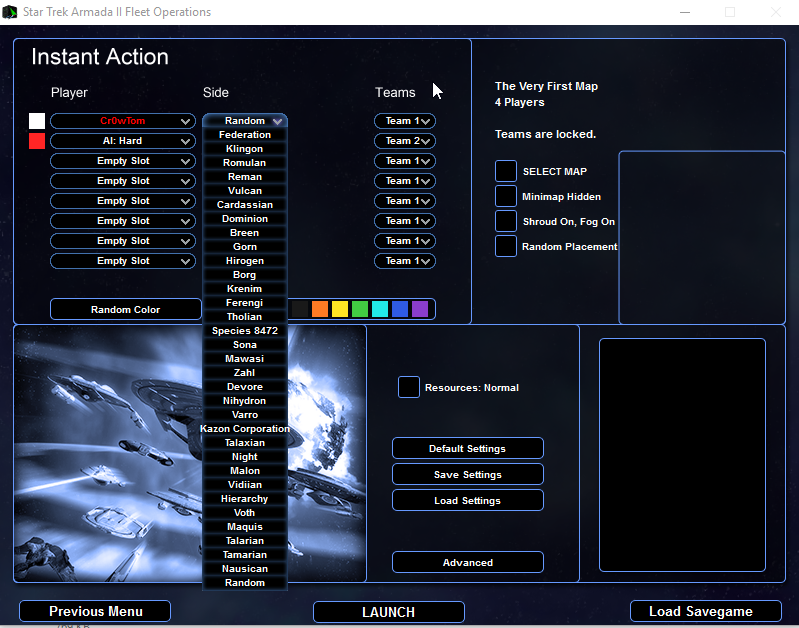 Wish I could help you out with that but the only people that possibly know how to add up to 6 or more playable races to Armada 1 are those that were working on the Future Tense Mod if they really did all the things they claim that they did.

One last question: that mod you were talking about with 17 races for Armada 2, what was it called and do you possibly remember where you saw it? I think I'd want to try it out. Maybe dissecting it could help figure out how they got more races into the game and also playable.
Reply